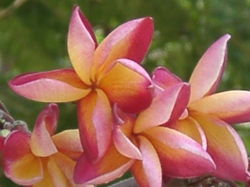 Mum is trying to put the twins to sleep. This is a daily ritual - Mum lies in the middle, Adya to her left and Adit to the right. The room is cool enough to forget the dusty night outside. The girl wants Mum to run her fingers in her curly, unruly hair. The boy wants pats on his bum and Mum is trying real hard to synchronise both the actions. And then, they want their bedtime stories too.

"Adya and Adit's turn today," Mum says.
"No, no, no," they oppose vehemently.
Mum turns into an emotional blackmailer.
"Mamma is not well no Adit? Adya, will you not help Mamma sleep tonight? Will you not move your fingers through Mamma's hair?"
"Mamma is big. She doesn't need a story to sleep," says Adit.
"And your hair doesn't smell good Mamma."
"Adya, you can move away then and go to the other room. Adit, no Mamma without a story tonight."
"Right Mamma. So here it goes - once upon a time there was a Hanuman and there was a Ben Ten. You know Ben Ten Mamma? He is the one who fights with the astronauts."
"Not astronauts. He fights with ETs. Extra-terrestrials."
"Who is narrating a story here?" Adit sounds offended.
"Sorry. So Ben Ten and Hanuman meet. And?"
"Oh ho Mamma, they don't meet. You know nothing. They live on a mountain, as brothers."
"Ok, that's interesting. Then?"
"So, they live on a mountain and they fight the demons. You know who demons are? Demons are the ones who don't listen to their Mums. They are not good. They are bad. Are you listening, Adya?"
"Haan haan, carry on. I am thinking of my story," Adya says, almost dismissing Adit's imaginative story.
"Ok Mamma, so they fight the demons and go to school after that. One day Hanuman was going to school... But I don't want to go to school after the summer vacation. Hanuman can go. Ben ten can go. I won't go."
"Adit, we were listening to a story," Adya says.
"It's a part of the story Adya."
"Boring. Very boring."
"..."
"..."
Mummy has just begun to soak herself into a sweet slumber and the words from twins reach her ears all jumbled up. (The AC is working well, she thinks). A sharp cry shakes her up, followed by swift action of separating the twins who are by now conjoined into a fight.

"Accha? Then why don't you say a story?" The sentence is followed by another whack on Adya's left leg which is lying comfortably on Mummy's tummy.
"What is this? Not a happy end to the story," Mum says, exasperated.
"Oh yes, it has a happy ending Mamma. Ben ten, Hanuman, Sonpari and Dora came with us to Purnea in the train. And we all ate a lot of mangoes," Adya says with a smile while Adit sits up to clap.
May all your stories be as simple as this one. Amen!
प्रस्तुतकर्ता Anu Singh Choudhary पर रविवार, अक्तूबर 16, 2011 2 टिप्‍पणियां: